by JerryChevalier
in Torso Hooks
Comments
I did some additional changes to the articulating hip and leg assembly. I made the back area narrower as well and I did a re-orientation of the base plate for better wire feeding throughout the endoskeleton. In addition, standoffs were drilled and tapped for controller placements and wire feeding. I used patterns for an insulated standoff for the Vantec Controllers I will be using. I also made some changes to the torso rotation motor and mount. I will be using the RDFR23 for the foot drives and 1 RET411P for the hip motor and 1 RET411H for the Torso rotation motor. Instead of the friction wheel rotation method used by Mike, I will be re-orienting the motor and installing a hub and extra large gear for a very fast rotation direct drive so I can more precisely control the speed and whip around as seen in the series when Bob May would spin the torso around quickly. Speaking of Torso’s……. I also received the Replica Torso from Mike Joyce. I had purchased the club standard torso and had it professionally prepared by Richie. It was awesome but when I took it to be professionally painted the shop that did it used the wrong paint and solvent. The Torso started to melt. In their haste they tried to fix it but made it even worse so it was a total loss. A 2500 loss. Ouch! 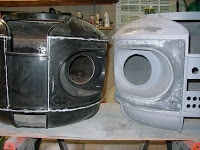 So I am starting over again with a new torso and donut. As you can see to the left there is a side by side comparison of the club vs. the replica torso. This will present some new and additional challenges in that the replica torso is smaller so other items like the collar, vents, donut and neon base plate may require additional fitment. Only time will tell if I will need to make new components or if the smaller torso size will even be noticeable with existing parts. The Replica torso is the black one. The club standard is the gray one.

Also, here is the drive section that I created. This baby hauls a lot of weight (over 330 lbs) at parade speed with ease. It is smooth on acceleration and deceleration. For those who don’t know what that blue thing is on top of it, that is the infamous Mike Joyce Replica Soil Sampler (no longer available). All of this stuff fits inside of the tread sections. I will be redesigning the soil sampler so members will have an option later on.

Sorry, the comment form is closed at this time.